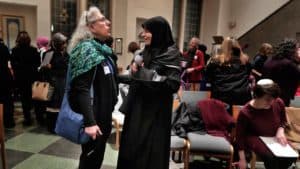 This article by S. D’I and Erasmus originally appeared on The Economist on May 22, 2017. Here’s an excerpt:

However toxic the climate, some Muslims and Jews try harder to get along

As President Donald Trump engages in his own, idiosyncratic kind of religious and cultural diplomacy in Saudi Arabia and Israel, back in the United States efforts by faith groups to understand each other better seem to be gathering pace.

Some of the most eye-catching projects bring together Muslims and Jews, and their organisers are now more likely to be female than male. Among their long list of motivations, many say they want to counter the inter-communal tension which started rising during America’s presidential election campaign and grew worse after the result.

Last month, for example, there were some unusual celebrations of the Jewish feast of Passover in New York. A mosque played host to 200 women and men as they gathered for a seder, the ritual dinner which ushers in the eight-day Passover commemoration. It was organised by the Muslim-Jewish Solidarity Committee, a group which also aims to raise awareness of social problems like poverty and food insecurity.

Next month, during the Ramadan fast, it has invited Muslim supporters to gather for an Iftar (a communal meal at sundown) in a synagogue. Such events send a powerful message to the world that once-antagonistic groups are putting differences aside, says Michelle Koch, director of the Committee. The current “toxic climate” in the United States makes such joint rituals all the more important, she argues.

Across the country, hate crimes have prompted some generous responses. For example, when a mosque in Florida was torched by arsonists, many of the contributors to a repair fund were Jewish. And when Jewish headstones were vandalised in Missouri, Muslims chipped in a total of $125,000 to repair the damage….

An even more explicitly female initiative is the Sisterhood of Salaam Shalom®, a New York-based non-profit organisation which invites women to help overcome Muslim-Jewish suspicions. Before the presidential race, the project had around 50 local groups scattered across country; since the election, the number has surged to 160. Sheryl Olitzky, executive director of the Sisterhood, says this success confirms that “women navigate the world through relationships and bonds, men through rules and regulations.”

For some Sisterhood members, Ms Olitzky says, the process begins with building personal connections of trust. She cites the example of a Jewish woman in New Jersey who lost her husband and found that a Muslim female friend was more faithful to her during the mourning period than any of her co-religionists.

In any Muslim-Jewish conversation, even one that focuses on relatively innocuous topics such as rituals and families, the elephant in the room is the Israeli-Palestinian question. As Mr Firestone recalls, several initiatives in this area foundered about 20 years ago because the Jewish participants wanted their opposite numbers to begin by accepting the validity of Israel as a Jewish state, while the Muslims wanted their interlocutors to renounce Zionism.

But after the terrorist attacks of September 2001, a new sort of inter-faith project became more common, one that gave greater prominence to women and to cultural exchange, with food as a popular starting point. More recently, Muslim and Jewish groups have collaborated to help refugees and protest against harsh crackdowns on migration.

The Sisterhood advises new members not to broach the Palestinian question with adherents of the other faith until they have known each other, and discussed many other things, for at least 18 months….”