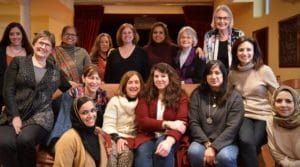 When we met over 10 years ago, Sheryl and I were confident that we –two women from different backgrounds–who committed to learn about each other’s lives and faiths and engage in good works could change the world. We centered the Sisterhood as an organization that created spaces where Muslim and Jewish women can get to know one another and build friendships. Our premise is that Muslim and Jewish communities share an over 1400-year relationship and our religious communities face similar challenges as minorities in America. Sheryl and I were committed to our friendship and we knew from the beginning that if our organization was founded on conflict it would not last. Muslims and Jews should not see each other only through the lens of contemporary politics. Despite a multitude of commonalities, many around us would try to draw us into politics by asking us about our position on Israel and Palestine. Our research and experience showed that groups who were founded and focused on debating the Israel-Palestine conflict collapsed. We were determined to try something different.

Personally I was very comfortable with this approach. As an activist with a political science degree and one interested in national and international politics, I had many outlets to learn, discuss and debate the conflict in the Middle East outside of the Sisterhood. Awareness and interest in Palestine were in my DNA. My earliest memories of performing prayer at home was my father’s ending prayers – praying for the people of Kashmir and Palestine. I was active in this area while in college and over the years I attend several marches in Washington D.C. for Palestinian causes. The Palestinian cause was a Muslim cause for me. Jerusalem is the site of the Noble Sanctuary. It is the third most sacred place for Muslim — where Muslims believe that the Prophet Muhammad ascended to the heavenly realm enshrined today by the Dome of the Rock. So even though I am not Palestinian, Jerusalem has meaning to me as a Muslim. As I have become more educated on the matter and older and wiser (I hope), I see the complicated conflict in the Middle East with more nuance and I see it as a human rights issue that should matter to everyone who cares about justice and peace.

Eventually Sheryl and I knew that we needed tackle the topic but we needed to proceed with trust, friendship and wisdom to be successful. We have had 6 annual conferences since 2014 where we have had workshops for our participants on the Israel-Palestinian conflict. We realized however that we needed to engage on this issue head on as a board – as leadership – to hopefully set an example for our organization. During our board meeting in November 2019 we embarked on a deeper exploration into the conflict. The time was ripe.

The time was also ripe because of the physical journeys that we undertook over the last years. The Sisterhood has sponsored 5 Building Bridges trips. Our first trip in 2016 was to witness the site of genocide in Bosnia, meet with survivors and also meet with Muslim families in Albania whose parents had saved and hid Jewish families fleeing the Holocaust. We traveled next to Azerbaijan in 2017 and experienced a Muslim society recovering from the erasure of their Muslim identity by Communists and meeting Jewish communities that lived in this Muslim majority country for hundreds of years. Our third trip to was to the American South, where we learned firsthand about the vestiges of slavery, segregation, the Civil Rights struggle and the continued challenges of the African American community. Summer of 2019, we traveled to Berlin, Germany to understand the Holocaust and the plight of Muslim refugees. When moved on to Poland — to Auschwitz — there were no words. We held the first ever Muslim-Jewish women’s prayer service in Auschwitz for all of those massacred including relatives of our Jewish sisters and including Muslims who we learned were also murdered at Auschwitz. Our most recent Building Bridges trip in January 2020 brought us to the Mexican border to learn, volunteer and witness the issues happening there. We went through check points within the US border. We faced the wall. We saw where a young Mexican boy was shot dead throwing a rock toward a US border guard.

It was no longer possible to not talk about Israel-Palestine. We were ready to acknowledge each other’s pain, disappointment and dashed dreams regarding the land both of our faiths held sacred.

In February 2020, a few weeks after we returned from the border trip, we gathered for a two-day board retreat to be guided by Combatants for Peace and the Center for NonViolent Communications as our facilitators. We faced our organizational, individual and collective relationships to this conflict, within the context of a broader examination of both local and global injustices, as well as our commitment to a response to the ongoing effect on the people living in the region. Valentine’s Day culminated with the following Statement of the Board of Trustees.

“The Sisterhood of Salaam Shalom holds a wide spectrum of views on Palestine and Israel. We recognize the complexity of these issues and the passion they invoke.

Our mission is to foster relationships between Muslim and Jewish women and teenage girls, to build bridges, and to fight hate. Inspired by our faith traditions, we believe any response to the conflict must be based on human rights, security, and selfdeterminations for Palestinians and Israelis alike.

We commit to working with individuals and organizations, especially those in the region, devoted to non-violent means of achieving peace and justice. We are compelled to engage with those working to transform the conflict, empower those most affected by the occupation, and foster the relationships necessary to build a just and peaceful future.”

It was a cathartic gathering. It was raw. It is the beginning and I know I am blessed to have all of these sisters in my life. We can change the world one person at a time and one step at a time with patience, love and faith.