As young Muslim and Jewish girls, religion never really came up within our friendship. As we got older, however, and started to consider our identity more, we began discussing our cultures, traditions, and ideologies with each other. It became apparent to us that we had more in common then we realized.

On our annual school trip we both felt excluded at the campfire night, since neither of us could participate in the camaraderie of making (un-kosher and non-halal) s’mores with our classmates. Our friendship is based off this bond that started to form when we recognized our many shared experiences. As we moved onto the same high school together, and we had to introduce ourselves, and explain our religions to a whole new group of people, we felt secure in the knowledge that the two of us would always listen and understand each other. 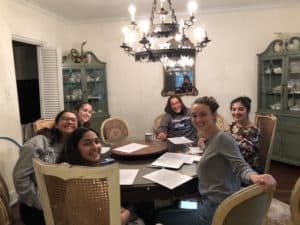 In high school, we entered a divisive political climate, and as our communities became increasingly attacked we knew we had to do something. We needed and wanted to create a change not only in Pittsburgh, but also have a positive influence on the world. We started to discuss the idea of creating a program for Muslim and Jewish teens,  where we could  share our stories, and realize the similarities between our two religions.

We wanted to take action, so when we heard of Sisterhood of Salaam Shalom we knew we had to reach out. When they told us that they wanted us and a few other girls to launch the teen branch of Sisterhood of Salaam Shalom, in the US, we were ecstatic because their ideals of bringing together two marginalized groups to create more unity was exactly the type of action we wanted to take. Having our first meeting, and being able to bring together a group of Muslim and Jewish young women was an empowering experience for all of us, and being able to talk with all the new teen leaders across the nation, just added to the excitement. As a Pittsburgh chapter we are ready to volunteer in many different communities, have meaningful discussions about Islam and Judaism, and make a lasting difference.