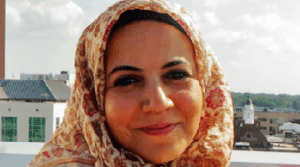 When people ask me to describe the Sisterhood of Salaam Shalom® annual conference, I often have so much to say, that I don’t even know where to start. This year was the 4th year of the conference and over 630 women attended — a tremendous jump from the 100 who attended in 2014. I typically characterize it as a ‘HopeFest”. The entire organization reminds us that despite alarming and hateful trends towards specific groups, namely, Muslims and Jews, we are all the same with regards to what we ultimately want to achieve — peace and love. Through stories, examples, workshops and also, by simply breaking bread and praying together, we remind ourselves of our accountability to be good to others.

As Sheryl always says, “Women navigate the world through relationships” and the conference is the culmination of that motto.  Immediately upon arriving at the event, you’re greeted by women who you have never met before — and those who you recognize from the year prior — who rush to embrace you with genuine care. One thing that is evident from observing the dialogue between several women attending the symposium is the tireless stream of advocates who share what they’ve been doing to combat hate, listen to each other’s stories and offer empathy and advice to each other.

People come to the flagship state from which the organization began from all over…California, Kansas, Canada — even Israel!  Though the NJ conference is on a Sunday, the entire experience actually begins with Friday activities. Normally, out of town guests are invited to observe Jummah prayer at one of the founder’s mosque and then share Shabbat dinner at the other co-founder’s home. Then, the night before the conference is a large gathering where chapter women socialize and catch up on progress. I’m always in awe of how it all began…Sheryl Olitzky started an interfaith dialogue group between Jews and Muslims back in 2010. She simply wanted to “stop the hate” after a trip to Poland where she saw anti-Jewish graffiti, and now the organization boasts over 110 adult chapters and 3 teenage groups that are in the pilot stage throughout the country. The conference is about bringing all those chapters together and about connecting with those who aren’t part of a chapter but care about the movement.

Senator Corey Booker, this year’s keynote speaker, kicked off the conference with a story about Prophet Abraham, the father of all three Abrahamic faiths. He described the core of Abraham’s character as he pleaded with the angels to spare the people of Sodom — mercy — a core principle of all three major religions. He went on to explain that America is a nation of love…love of patriotism and love of countrymen and countrywomen. He ended by reminding us that the Declaration of Independence actually ends with words of interdependence…that we must “mutually pledge our lives, fortunes and sacred honor to each other.”  Other speakers included Dr Ingrid Mattson, Anita Diamant, Haroon Moghul and a panel facilitated by Dean Obeidallah that included Rabia Chaudry, Rana Abdelhamid, Letty Pogrebein and Sheryl Olitzky. Everyone not only gave the audience narratives of encouragement but also, words of motivation.

The best part of the conference, in my opinion, are the workshops. Every participant is invited to attend 2 out of the 24 workshops taught by professionals and experts on sessions that cover practical solutions like “Encountering “Us vs. Them”: How to Talk to a Bigot or spiritual such as “Encountering our Mothers: Sarah and Hajar” to artistic such as the “Sacred Poetry: A Journey to the Heart of the Sisterhood.” Everyone is typically hugging or exchanging contact information immediately following these classes.

I often hear from people that they are not happy with the current state of divisiveness that has plagued our country but they are not sure what they can do about it. The Sisterhood of Salaam Shalom® has created a framework for women to bond together and then commit to resolving some of this hateful rhetoric. Simply being able to talk to others who, through the bond of friendship, can offer advice, or simply, provide a shoulder to lean on or just an ear to listen.

Through resilience, resolve and solidarity at these conferences, we will, God willing, stay resolute with the intention to change the narrative for the better for people of all faiths, insha’Allah בעזרת השם.

Heba Macksoud and a Sisterhood of Salaam Shalom® board member and a coleader of the charter chapter.